Dr. Arné follows all CDC and ADA guidelines in protecting our patients. 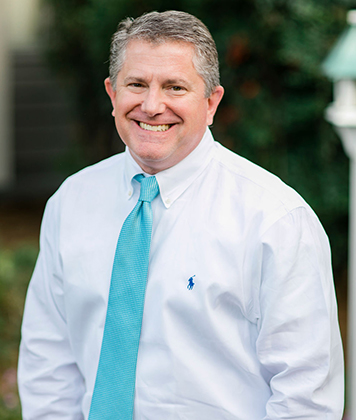 In 1989, Dr. Bruce Arné graduated from Appalachian State University where he attended on an Athletic Scholarship for Soccer. From ASU he went on to The University of North Carolina at Chapel Hill for graduate school. He finished his Master of Science degree in Audiology in ’91. While in graduate school, Dr. Arné was able to work very closely with the UNC-CH Dept. of Otolaryngology (ENT). It was during this time that he developed an interest in head and neck surgery. He also became acquainted with many of the Dental students at Chapel Hill. It was because of these friendships that he made the decision to apply to the UNC-CH School of Dentistry (being accepted in ’93).

After graduating with a DDS degree in ’97, Dr. Arné was accepted into the UNC-CH Department of Anesthesiology as a resident. He interviewed alongside many newly graduated MD’s for this very competitive position. After his anesthesiology residency, he received comprehensive training in Oral and Maxillofacial Surgery (OMFS) at the UCSF-Fresno campus (University Medical Center- a Level I trauma center). It was at this time that he was able to develop his skills in bone grafting, dental implant placement, wisdom tooth extractions, facial reconstruction, treatment of head and neck trauma and cancer, pediatric craniofacial surgery, and pathology.

In 2002, Dr. Arné moved to Wilmington, NC and established his practice. In the early years of being in private practice he held an adjunct associate professor position in Oral and Maxillofacial Surgery at UNC-CH; he was appointed as a team doctor for the UNC-W Athletic department; and elected President of the Board of Directors for the Cape Fear Soccer Association. He also developed an interest in disaster and tactical medicine which led to his assisting the men and women of the US Armed Services. He was appointed to the editorial review board of the Journal of Special Operations Medicine and the International Association of Oral and Maxillofacial Surgeons disaster relief team.